Pacific island countries (PICs) face a particularly difficult challenge when it comes to rural electrification. As a result of the unique geographical situation in the region, where long distances separate sparsely-populated areas, and markets are too small to achieve cost savings through economies of scale in electricity production, the costs of supplying electricity to rural areas are enormous. This has resulted in a situation where approximately 70% (or approximately 50% excluding Papua New Guinea) of the region's population still lacks access to electricity.

In addition, despite their abundance of renewable energy resources, PICs remain almost completely dependent on imported fossil fuels for meeting their energy needs. Imported petroleum products account for an average of 40% of countries' gross domestic products. With rising petroleum prices, and growing trade deficits, the current situation is likely to be unsustainable in the future. 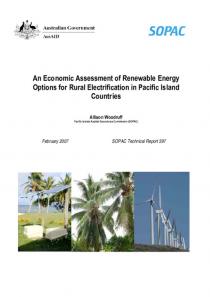